5G is Arriving – What You Need to Know

Click here for a current list of Small Cell 5g Pole permits and installation locations in the French Quarter.

See below for a current list of updates regarding 5G installation in the French Quarter:

Fifth Generation, or “5G,” cellular service is the newest advancement in cellular technology. It requires new transmission towers “small cells” that differ from the large-scale macro towers and the 74 existing fifteen-foot 4G towers in the Vieux Carré.

In 2019, the carriers proposed installing new 35’ – 40’ 5G cell towers within the French Quarter boundaries. For full coverage in the French Quarter that could mean 200 towers, or a pole at nearly every intersection as they need to be located within 300 feet of each other in an unobstructed line of sight to be effective. These earlier proposed 5G poles could incorporate 4G antennas but would have also included two large cabinets (5’H x 2’D). When presented with these designs, we were horrified and immediately began to discuss alternatives to these “tout ensemble” destroying infrastructure.

The Law and what New Orleans can regulate

After deregulating the installation of 5G in 2018, the Federal Communications Commission (FCC) was sued by the Natural Resources Defense Council, the National Trust for Historic Preservation, and several Native American Tribes. In August 2019, they won their challenge that the FCC had failed to adequately address possible harms of its deregulatory efforts and the benefits of environmental and historic preservation review. This reinstated the Section 106 review process.

In August of 2020, the federal ruling of City of Portland v. United States (including dozens of other cities such as San Francisco, New York City, Los Angeles, Boston, Chicago, Washington, DC, Las Vegas, Philadelphia, Austin) upheld the authority of the FCC that prevents local municipalities from an outright prohibition of 5G installation; however, this legal effort was able to gain some concessions. Cities were given the authority to regulate the aesthetic design and locations of these poles and to assess the potential to affect historic resources. This gave the Vieux Carré Commission an advisory role: allowing the staff to assess locations in regards to historic resources and giving the commission the opportunity to make non-binding recommendations regarding design.

The Mayor’s Office of Utilities initiated public information sessions with the VCC beginning in late 2019. VCPORA, in collaboration with these city departments and the Vieux Carré Commission Foundation, French Quarter Management District, and French Quarter Business Association, have been working with the cellular wireless carriers and pole manufacturers to directly address the issues surrounding 5G deployment in the French Quarter, particularly to address the locations, aesthetics, and installation of this new infrastructure. These considerations include:

Within the French Quarter, 5G poles will be introduced as streetlight poles with the technology built into the structure. All new 5G poles will replace existing streetlight or traffic poles, creating zero net gain of infrastructure poles in the public right of way. Most new poles will be located near a corner or mid-block.

The Mayor’s Office of Utilities is requiring collocation by carriers, meaning sharing of an individual pole for different technologies, on 5G poles whenever possible.

New poles are prohibited on block faces of purple-rated, significant buildings and spaces like the St. Louis Cathedral and Jackson Square, the Old U.S. Mint, and the Ursulines Convent, etc.

The French Quarter has three streetlights per block, so the Office of Utilities is trying to limit 5G streetlight pole installation to 1 per corner and 2 per block in most cases.

Read more: 5G wireless is coming to New Orleans: These rules aim to make sure towers don’t cause ‘clutter’

Toro Blanco, LLC, a 5G pole manufacturer, worked closely with the VCC and the French Quarter community to design a (considerably shorter) pole to accommodate the technology and meet the design standards laid out in the new guidelines. An early prototype was erected for public review in October of 2020.

The initial prototype for review, October 2020

Following the public demonstration, the VCC opted for moving the lamp down the pole to the height of the current historic lamps for illumination continuity. Other details were refined into an acceptable design. 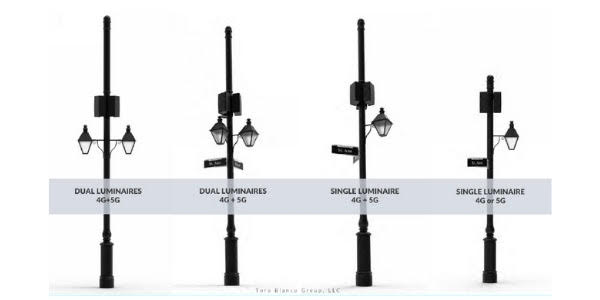 During this design review process, the telecommunication companies (Verizon, AT&T) initiated the Section 106 process with the State Historic Preservation Office with input from the VCC and preservation groups.

This map shows the approximate locations of the proposed cell towers in the French Quarter that have been submitted by Verizon and AT&T. Some locations have since been moved to accommodate existing street and building elements such as galleries and roof overhangs.

Currently, there are 144 poles that are being installed between Verizon and AT&T. 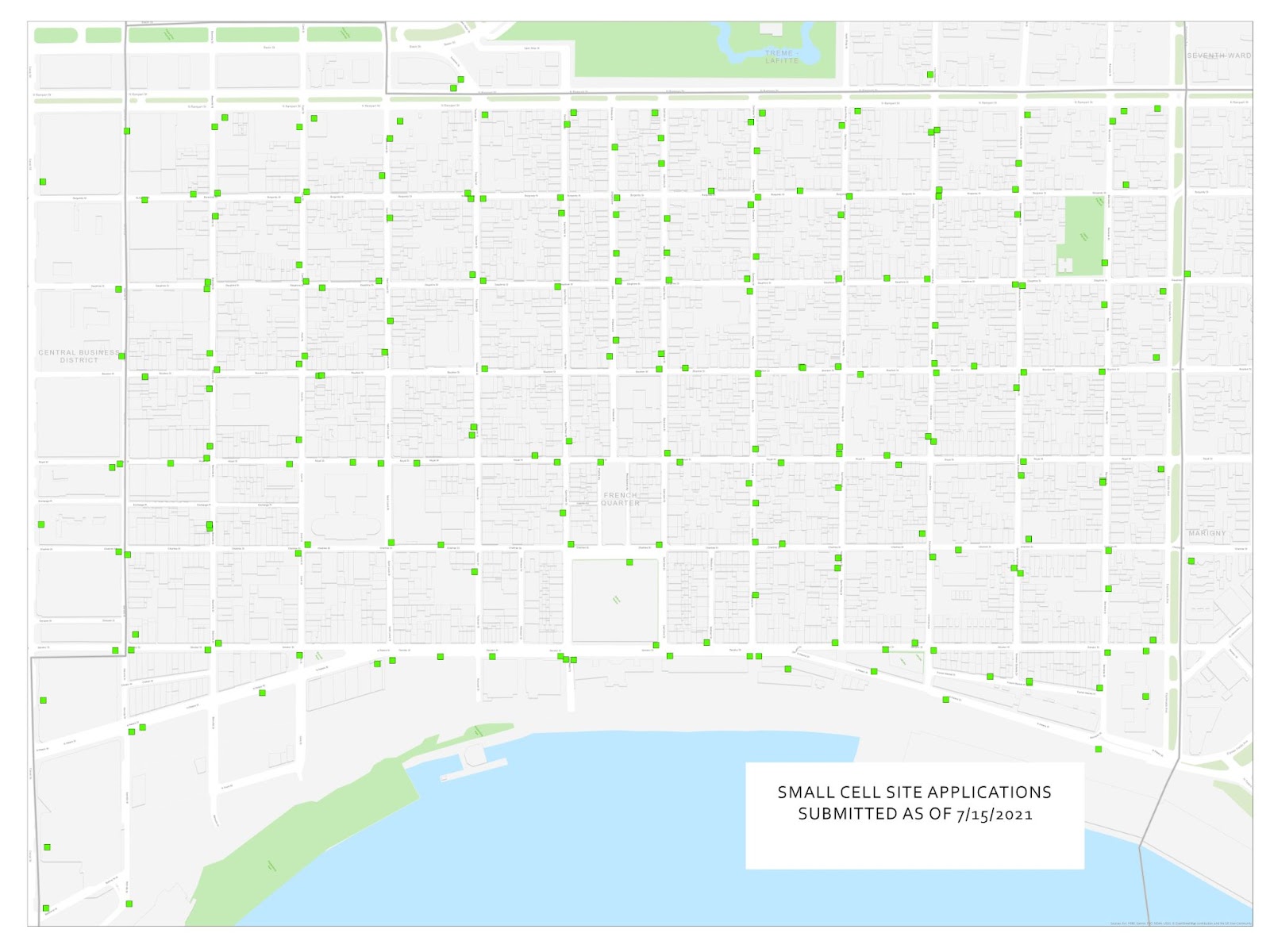 Approximate locations of 5G cell towers in the French Quarter

What is happening now

In preparation for the first installations in October, the City was coordinating with the manufacturers, installation contractors, carriers, and utility services to coordinate all street and sidewalk cuts. Given nationwide supply chain and manpower issues, it quickly became apparent that each installation would not meet the 48 hours expected installation window, and were instead approached in an unfortunate piecemeal approach.

Additionally, once a few had been installed, design concerns were raised by neighborhood representatives and the VCC. As it turns out, the Department of Public Works did not ask for shop drawings so the VCC was unable to review them. Discrepancies in the material selection and construction details were brought to light. The VCC is currently working with Toro Blanco to address these, including the specifications for the historic lamps and the fiberglass-wrapped bases. It is expected that they will be replaced with cast iron. The pole will be capped with a finial once the carriers install their antennas and the connecting arms for the lamps are still being manufactured.

Please Note – these are only temporary! 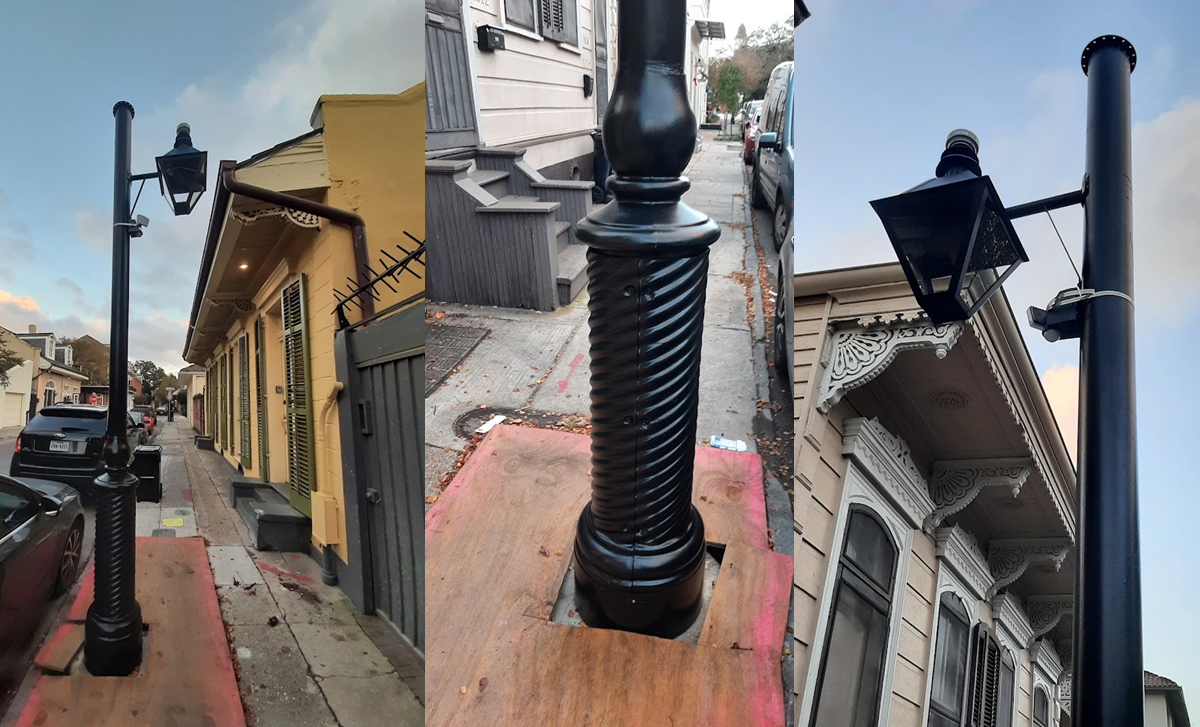 Because many original streetlights were removed in preparation for the 5G replacements, some areas in the neighborhood remain without nighttime illumination. After significant concerns raised by neighborhood advocates, the City has redirected the installers to erect temporary lighting on these incomplete poles while the designs are being modified.

All other installations are on pause but will likely resume in the new year. We have encouraged the City to halt any unfinished installations in the weeks leading up to Mardi Gras to reduce the impacts of damaged sidewalks and unlit corridors during the heavily trafficked carnival season.

Questions or concerns on these installations should be directed to Jonathan M. Rhodes, Director of the Mayor’s Office of Utilities, at Jonathan.Rhodes@nola.gov. Please cc info@vcpora.org so we can also keep track!