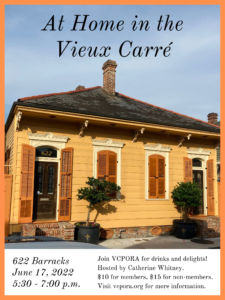 Our At Home in the Vieux Carré series is a great way to meet your neighbors and get an inside peak at a gorgeous French Quarter home.

We are also accepting volunteers to help staff this and later events. Not on our volunteer list yet? Email info@vcpora.org or fill out the volunteer form on our website to get involved with all the latest advocacy and event opportunities.

Catherine Whitney first visited New Orleans in 1990, not knowing if she could ever live here—but repeat visits revealed the city’s undeniable charm. After two and a half decades and stints in New York, New Jersey, Texas, and Florida, Catherine made the move.

She began by renting an apartment in the 800 block of Royal Street in 2016. She was enamored with the apartment’s ties to the 20th century art scene. One of the previous tenants regularly hosted the likes of Tennessee Williams and Alberta Kinsey. (Catherine’s grandfather, Daniel Whitney, was a member of the Arts and Crafts Club of New Orleans, a collective of artists that from 1922 to 1958 celebrated the neighborhood’s romantic nature and sought to preserve it.)

Despite the history, Catherine also wanted a larger space to host friends and family when they visited. She thought a modest condominium would suffice. Unfortunately, her long search led her to nothing but dead ends. She then enlisted the help of relator Sue Roberts and inspector Robert Fullen to aid her search. When 622 Barracks came on the market in 2019, she worked up the confidence to go big or go home. 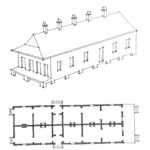 The c. 1890 double shotgun had already been consolidated by the previous owner. It was just up to Catherine to furnish the place. Works by Franco Alessandrini, James Michalopolous, and Andrew Hopkins (to name a few) now adorn her walls. The piano room is in fact Catherine’s favorite “because all the art is in there.” The living room doubles as an impromptu dance floor, also making it a fan favorite.

When not enjoying the serenity of her own home, Catherine can be found enjoying concerts at the Jazz Museum, brunch at Brennan’s, or dinner at Irene’s. She also loves to spend time with neighborhoods in their world-famous courtyards.

Catherine says of the French Quarter: “It’s the best place in the world to that I know of.” Her advice to those thinking of moving to the neighborhood is to go gradual. “It’s hard to have a car here. There will be a lot of tourists.” But, if you can accept things as they come, you can meet some of more the “most incredible people” who “talk to each other, dance together, and dine together”.

Something always unfolds, she explains. “I’m not sure I believe in fate, but sometimes in New Orleans I do.”