Our gracious host is opening his home in what is often referred to as the “the oldest apartment building in the U.S.” Built in 1849-1851 by the  Baroness Micaela Almonester de Pontalba, the Upper Pontalba originally stood as a collection of sixteen individual four-story row houses, facing its sister, the Lower Pontalba across the Place d’Armes, or what is now Jackson Square. Through several major interior renovations, the individual row houses were interconnected, and the upper floors

were converted into 50 individual apartments while the ground floor was divided into 14 commercial units. Read more here.

Come gaze off the balcony at Jackson Square while enjoying refreshments and specialty cocktails. Collin is planning some delicious treats for the event too! 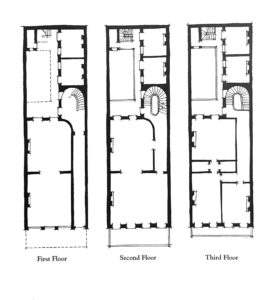 Collin Davis Rhodes was born and raised in

Shreveport, Louisiana. He attended, and loved,

Southern Methodist University in Dallas, Texas. Collin grew up visiting New Orleans with his family and was very close with his great-aunt Peggy, who attended art school at Tulane University in the 1950s. During her time in New Orleans, his great-aunt Peggy lived in the Pontalba apartments too! She eventually relocated to New York where Collin fondly remembers how his great-aunt would take him to art galleries, Broadway shows, and operas. Collin eventually followed in the footsteps of his great-aunt and, after waiting just over seven years on a waitlist, made the Upper Pontalba building his home with his two dogs.

“I finally feel at home!”

Our At Home in the Vieux Carré series is a great way to meet your neighbors and get an inside peak at a gorgeous French Quarter home.

We are also accepting volunteers to help staff this and later events. Not on our volunteer list yet? Email info@vcpora.org or fill out the volunteer form on our website to get involved with all the latest advocacy and event opportunities.

Please note – this home is on the third floor, without an elevator. We apologize for the reduced accessibility of the venue.