City Council Meeting on the CZO: the Good, the Bad, and the Ugly

No matter which side of any particular zoning issue you stand, if you care at all about a fair and open process, genuine citizen participation, and the years of work that New Orleanians put into creating a new Comprehensive Zoning Ordinance, then last Thursday, May 14 was a dark day.  Despite over 7 years of meetings, hearings, charrettes, workshops, roundtables, and more meetings, amendments were introduced at the 11th hour – some even during the council meeting – and several proposed radical changes for land use in this city, changes that had never been mentioned to the public, much less discussed

The citizens of this city were told to participate in this process because our voices mattered.  Because the CZO was going to be the embodiment of New Orleanians’ hopes and aspirations for our city.  Citizens reviewed inches-thick drafts of the CZO, submitted comments, spoke at hearings, organized their own public meetings, and more.  Because all of that work, we were promised, would be reflected in the final product.

But, thanks to a flurry of last-minute amendments, the “process” was rendered a mockery.  The spirit of the CZO, which emphasized citizen participation, transparency, and fairness, was turned on its head as changes put forth by special interest groups often subverted years of public input, and even deprived the public of their ability to be informed citizens.

Many vital and complicated documents were not shared with the public in advance.  We all know that the devil is in the details: It’s what is in writing, what is subject to review, questions, and comment that matters.

Thanks to the actions of the sitting City Council, you, the citizens of New Orleans were deliberately denied that opportunity.

By a vote of 4-3, the council reinstated Section 8.1 in the zoning code.  As many of you know, this provision obligates the Vieux Carre Commission to apply an additional layer of review for new projects in the French Quarter.  Even those who don’t care for preservation or old buildings, we believe, should have wanted 8.1 retained because it protects the resource that is the single biggest economic driver for our city.  Yet the vote was razor-thin:  4 to 3, with Council Member Stacy Head, who authored the amendment, joined by Council Members Susan Guidry, Latoya Cantrell, and Jason Williams.  Voting against were Council members Nadine Ramsey, James Gray, and Jared Brossett.   (CM Ramsey had a competing amendment, NMR-19, that would have kept 8.1 out of the new CZO, but she withdrew it later in the day.) 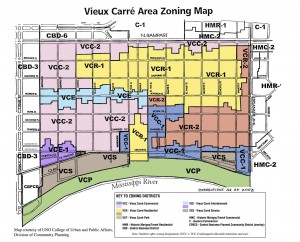 Also in the good news column:  an amendment by CM Stacy Head to retain the current prohibition on new bars in the VCC-2 zone (all of the pink areas in the graphic below). This reflected the consistent public input for the entire CZO process.  As we have said meeting after meeting, in 7+ years of attending Master Plan and CZO meetings, no one EVER said, “You know what we need in the French Quarter?  More bars.”

Now for the not-so-good news.  And there’s lots of that…

Several amendments were introduced at the last minute, with no opportunity for public review or discussion.  In fact, District C Council Member Nadine Ramsey introduced 11 amendments after 9 am on Thursday, after the council meeting had already begun.

Here is information on those that will or would have had the greatest impact on the French Quarter.  (Note:  the amendment titles are the author’s initials followed by a number.  NMR is CM Nadine M. Ramsey.  Click on the title of the amendment to read the full text, or you can see all of the amendments and the council votes here.)

This amendment struck the following language from the purpose statement section of the code for VCE (200-700 blocks of Bourbon) and VCE-1 (area around House of Blues):

…while remaining respectful of the quality of life of adjacent

residential uses and the overall character of the Vieux Carré

Basically this amendment shifts the character and focus of the Vieux Carre further toward entertainment uses, and further away from the mixed-use business and residential nature that has marked the Quarter’s neighborhood appeal.

Part of this amendment, which was difficult to digest given no advance notice, would have allowed every restaurant in the city (not just the Vieux Carre, but the entire city) to sell packaged liquor.  Every single one.  The Louisiana Restaurant Association was in full support, with its representative speaking about the time and effort that that organization had put into this amendment.  There was no concern evinced for the hundreds of thousands of New Orleanians, who’d been deprived of the opportunity to comment on the proposal, or even know of its existence.  Also speaking in strong support was Chris Young, who identified himself during the meeting as a representative of the French Quarter Business League (formerly the Bourbon Business Alliance).

Thankfully, this part of NMR-12 was not approved.  It has been referred to the City Planning Commission, which will allow for the kind of feedback and debate – denied at the council meeting – that such a far-reaching change deserves.

This amendment, like several of he others, was not made available to the public until after the council meeting was underway.  We strongly objected to NMC-14 not because of the content and impact – no one except the author(s) knew what that might be – but because it was impossible to analyze the amendment and form an educated opinion.   See this story in The Advocate for more details:

Thankfully, this amendment was not approved, and was instead sent to the City Planning Commission, whose process should allow us and the public to understand exactly what is being proposed.

This amendment appeared to allow live entertainment in courtyards, which we strongly objected to because of the proximity of other uses, commercial and residential alike, to entertainment venues.  But once again, the public was not granted the courtesy of advance notice.  Without the opportunity to digest and analyze the language, we objected to its approval.

To give you an idea of the challenges faced by anyone trying to decipher these last-minute amendments, here’s the text of CM Ramsey’s NMR-17:

To understand what all that means, one would have to do a search and comparison with Article 20, a 49 page document that deals with use standards, and then review Article 20 again to check for impacts on other parts of it. Suffice it to say, such an analysis was not possible given the late notice

This amendment was referred to the City Planning Commission.

We are still evaluating the impact of the passage of the CZO and of the amendments that did pass.  And we will be watching the City Planning Commission calendar closely so that we, and you, will be aware when items that may affect the French Quarter and the city as a whole come up.

to everyone who attended meetings, made phone calls, sent email, and generally participating in trying to make the CZO what it should have been.  Your efforts were not all in vain!  And we hope you’ll continue to be active, engaged citizens – the city needs you!