Don’t take the Quarter for granted: Urgent reforms are imperative 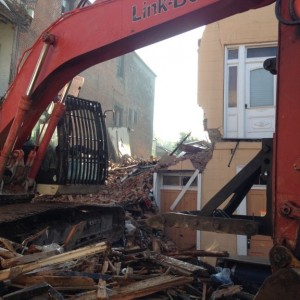 Workers clear rubble from 810 Royal St. following the recent collapse of a 200-year-old French Quarter building. Photo: Meg LousteaThe fragility of the Vieux Carré was on full and terrible display late last month as a building more than 200 years old crumbled to the ground. Now that the dust has settled — quite literally — we have the opportunity for some reflection and analysis. The conclusions are not encouraging.

At its most stark, the collapse of 810 Royal St. was a brutal wake-up call that this entire neighborhood is under threat. And that threat goes beyond the buildings themselves. The building’s loss is a symbol of the degradation not just of our priceless architectural heritage, but of the French Quarter as a neighborhood. The questions we need to be asking are these: Can the Quarter survive, physically, socially, and culturally? And do we as a city care enough about it to make sure it does?

For too long, we have paid the French Quarter loving lip-service but have taken it for granted, assuming that because it has always been here, it always will be. We haven’t always backed up our professed love with actions that translate into real protection for an irreplaceable neighborhood.

We’ve paid little attention to the kinds of investment, maintenance, and enforcement that are the essence of effective stewardship of an historic gem. Sure, there’s been public outcry over high-profile violations of this neighborhood: 18-wheelers careening into buildings; scofflaw property owners installing ATMs in historic facades; beloved institutions threatened with becoming T-shirt shops. But where we have not done enough is in the realm of the “little things,” the policies and actions that ensure we don’t get to the point where the very viability of the Vieux Carré is in doubt. That’s where the fragility of both the buildings and the neighborhood overlap.

We all say we love the French Quarter. Let’s back that up with action.For too long, we have allowed a bevy of violations to go unchecked. Some might be considered minor — animal waste left on the streets, piled-up garbage, signage and merchandise cluttering building exteriors, sidewalk barkers hustling customers — but the cumulative effect is a culture not just of permissiveness, but of anything-goes.

The French Quarter is a finite resource, and yet we continue to behave as though it can accommodate an ever-increasing number of tourists, events, and erosion of agreed-upon standards. Like all ecosystems, it has its limits, and once those are crossed, there are consequences. Last year we welcomed a record numbers of tourists – 9.28 million — without pausing to acknowledge their impact on a one-square mile neighborhood. (By way of comparison, the nation of Ireland, with almost 33,000 square miles, had 8 million visitors in 2013.)

In theory, there are policies in place to offset the effects of such a heavy visitor load, but follow-through has been spotty at best. The good news is that civilian patrols are in the works to handle non-emergency problems ranging from traffic and parking control to illegal vending. Such measures are welcome in this enforcement-starved area, because it’s this stuff, the nitty-gritty, that we must focus on if we really want to ensure the long-term viability of the French Quarter.

But what about the Quarter’s built environment, its buildings and walkways and parks? What can be done immediately to avert further damage? Considering the potentially dire implications of doing nothing, everything should be up for consideration. Here are some ideas worth exploring:

Increase allocations to the Vieux Carré Commission, which is charged with regulating and monitoring the exteriors of the 3,000 buildings in the Quarter

Enforce all the laws regarding oversized vehicles in the Quarter. (It’s indisputable that vibrations from heavy trucks and buses are causing daily damage to buildings.)

Get proactive with inspections, both exterior and interior, especially of buildings that are not occupied full-time. (The Royal Street building that collapsed had been cited for exterior deterioration, but current rules kept inspectors from going inside to check for structural damage.)

Encourage or compel property owners to have their buildings inspected by structural engineers. This could be handled by the city, or by the property owners, with the costs of inspections offset via a property tax credit.

We all say we love the French Quarter. Let’s back that up with action. Let’s make sure that our oldest neighborhood, our international treasure and economic driver, has a future at least as long as its past.

Meg Lousteau is the executive director of the Vieux Carré Property Owners, Residents and Associates, Inc., and a fifth-generation New Orleanian.