We know that the issue of Short Term Rentals has dragged on for years. Our first set of regulations was overly permissive, allowing investors to convert thousands of homes into mini-hotels which proved disastrous for neighborhood quality of life and housing affordability. Determined to undo this damage, the New Orleans City Council, led by District “C” Councilmember Kristin Gisleson Palmer, has spent the last year creating a set of STR regulations that works for this city.

Be prepared!  The Council is scheduled to vote on these updated Short Term Rental Regulations on Thursday, August 8. Let’s make sure they get it right this time!

Ordinance No. 32,685 modifies the City’s Comprehensive Zoning Ordinance (CZO) to establish two categories of STRs, Residential and Commercial, and also specifies where these types are allowed and how they must operate. Most importantly, all Residential STRs will only be allowed in homes where an owner lives and possesses a Homestead Exemption.

This ordinance also deals with neighborhood prohibitions, including the French Quarter and the Garden District. A previous, and unsuccessful, effort to open up the Vieux Carré Entertainment District around the House of Blues (VCE-1) may be revisited – please stay vigilant in opposing any attempts to expand STRs in the French Quarter! We all know the risks are too high and would continue to place tremendous pressure on a neighborhood struggling to recruit and maintain long term residents.

What remains unclear is how this ordinance will deal with limiting the number of Commercial STRs in multi-unit buildings and how they can be leveraged for the production of affordable housing.  A feasibility study will be released very soon that will examine scenarios where an affordability match may be required for new Commercial STRs. We feel the City must take advantage of this opportunity now as this incredibly lucrative business model can be used to produce a dire community need.

Ordinance No. 32,691 establishes STR owner, operator and platform permits and fees, operating regulations and enforcement penalties. Residential permits will range from $250 to $500 annually and Commercial permits will be significantly higher, currently being contemplated at $5000 per unit. Failure to comply with the operating regulations, including listing without a permit or exceeding the maximum allowance of guests, can carry fines of $500 per violation, per day.

Platforms, such as Airbnb, Homeaway, VRBO, etc., will be required to obtain City-issued permits, currently set at $50,000 annually.  The platforms must remove any listing that does not have a valid, city-issued STR rental license or face revocation of their operating permit.  We feel that the platforms must also face significant financial penalties for allowing illegal listings on their sites and that the City can go further by requiring the platforms to prove their compliance through regular reporting of its host activities.  Ultimately, they should be compelled to share raw data about their “hosts,” including owner and operator names, addresses, and complaints about discrimination or guest behavior.

Legal battles across the country are being waged against these platforms over data sharing requirements and their refusal to comply with local regulations.  The map below indicates STRs operating in the French Quarter, where it is illegal except along the 200-700 blocks of Bourbon Street. Without platform compliance, the city’s overburdened staff and residents – you! – are responsible for reporting and policing illegal STRs. 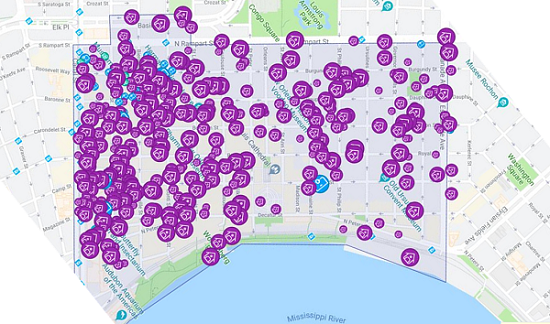 Unresolved issues:
The City Planning Commission produced a report on the possibility of using STRs to promote economic development in certain areas and as a tool to remediate blight. Additionally, this study examined the potential for “grandfathering” the Temporary permits that existed prior to their prohibition last May, though it did not look favorably on this option. Still, we expect that amendments to the ordinance will be introduced during the Council meeting that will allow hosts to let multiple properties. We strongly encourage the City to wait and monitor the effectiveness of the new regulations before opening the door to any exceptions.

We believe that responsible home sharing regulations will allow New Orleanians to financially benefit and protect our communities. See this recent piece about how neighborhoods like Treme are experiencing rapid property tax hikes due to the over-proliferation of STRs. Recently, the “It’s Time New Orleans” coalition released a report that shows how STRs have overtaken New Orleans neighborhoods, pricing residents out of their own communities.

We will continue to monitor these ordinances and any amendments as August 8 approaches. Please stay tuned for updates in our Weekly Vieux and on our website. We encourage you to continue calling and emailing your City Council to remind them that all neighborhoods deserve protection.